Remembering Sylvia Plath, that most brilliant and radical of poets, on the occasion of what would have been her 85th birthday.
She died, age 30, in 1963.

With summer now upon us, a deeper meaning to a lighthearted season comes by way of some evocative lines by the great American poet Mary Oliver from her poem, “The Summer Day” — and its challenging conclusion:

I don’t know exactly what a prayer is.
I do know how to pay attention, how to fall down
into the grass, how to kneel down in the grass,
how to be idle and blessed, how to stroll through the fields,
which is what I have been doing all day.
Tell me, what else should I have done?
Doesn’t everything die at last, and too soon?
Tell me, what is it you plan to do
with your one wild and precious life? 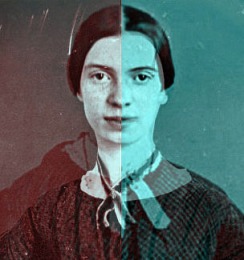 It’s always a bit of a surprise to remember that Emily Dickinson had only ten poems published in her lifetime. It was not until four years after her death in 1886 that the first volume of her works stunned the literary world with their avant-garde and almost radical use of language and punctuation — long live the dash! — laying an important part of the groundwork that would usher in what we now know as modern poetry.

A confluence of Dickinson-related events is a current reminder of her lasting impact. For the first time, thousands of manuscripts held by such institutions as Harvard University and Amherst College have been assembled on the Emily Dickinson Archive, an online collection where scholars and poetry lovers alike can scour the majority of her writings. “To have all these manuscripts together on one site and to have it so thoroughly searchable is extraordinary,” Cristanne Miller, a professor at the State University of New York at Buffalo and a member of the project’s advisory board, recently told the New York Times. 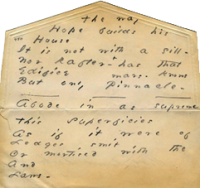 Perhaps even more interesting for Dickinson aficionados is the publication of The Gorgeous Nothings, a compilation that consists of assorted envelopes and other pieces of reused paper that Dickinson turned to as palettes for her writing later in life. (Some are also featured in the exhibit, Dickinson/Walser: Pencil Sketches, at the Drawing Center in Soho, New York through January 12.) Another window on her enigmatic mind, the “envelope poems” appear on scraps of varying shapes and sizes (one is shown at left), all in that distinctively elusive handwriting, a spontaneous hybrid of cursive and block.

It was after 1875 that the famously hermetic Dickinson ceased to create clean copies of her poems, and opted to pen (or rather, pencil) her thoughts on all kinds of available household paper. The most striking for me was seeing the beautiful line — “We talked with each other about each other though neither of us spoke” — on a run-of-the mill ledger sheet (right), timeless words which she also later rewrote on a scattered envelope.

I think I’ll agree with the historians who believe that the untypical avenues of expression were no accident, but actually an attempt on Dickinson’s part to explore alternate means of presenting poetry in ways beyond the conventional. Much in keeping with the opening line of one of her well-known poems: “I dwell in Possibility”…

The title comes from a famous American poem, by a writer who epitomized paradox in avocation and appearance, as exemplified in the portrait shown left, from 1952.

“Poet” would not be the first description that comes to mind in this photograph of Wallace Stevens (1879-1955), who looks more like a buttoned-up CEO than any cliché image of a creative type. Indeed, Stevens’ day job was as an insurance executive, but he became one of the great voices of modernist poetry. (The image is among those featured in Poetic Likeness: Modern American Poets, on view through April at the Smithsonian’s National Portrait Gallery in Washington, D.C.)

As I read through that great compilation of his work, The Palm at the End of the Mind (including the aforementioned “Emperor,” with the indelible line: “bid him whip in kitchen cups concupiscent curds”), there were two poems that especially brought me back to the percipience of Stevens, both offering intriguing connections to the realm of art.

In an analysis of the astonishing “Sunday Morning” the writer Robert Buttel saw Stevens as establishing himself as a kindred spirit to Henri Matisse, in that both artists “transform a pagan joy of life into highly civilized terms.” Based on a languid woman’s spiritual reveries on a Christian sabbath, and replete with religious allusions, its opening lines are among the most descriptively scene-setting in modern American poetry:

Complacencies of the peignoir, and late
Coffee and oranges in a sunny chair,
And the green freedom of a cockatoo
Upon a rug mingle to dissipate
The holy hush of ancient sacrifice. 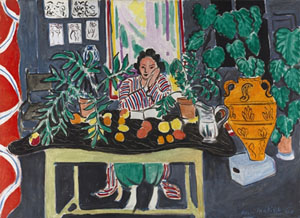 And while the kindred-spirit aspects that Buttel alluded to in the connection to Matisse were no doubt philosophical, it’s not a stretch to see a visual bridge between the opening tableau of “Sunday Morning” and a piece like Interior with an Etruscan Vase (left) by the French painter, which followed many years later.

If the Matisse comparisons are subtle and under the surface, “The Man With the Blue Guitar” is an overt homage to another artistic soulmate, Pablo Picasso, whose The Old Guitarist was painted in 1903. Again, a poem that features a striking Stevens opening:

The man bent over his guitar,
A shearsman of sorts. The day was green.

They said, ‘You have a blue guitar,
You do not play things as they are.’

The man replied, ‘Things as they are
Are changed upon the blue guitar.’

Talk about full circle. Which, incidentally, is so much of what art is all about. 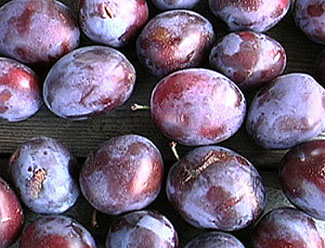 Reading the Selected Poems of William Carlos Williams over the past weekend, I realized a deeper affinity on the part of the great American poet for an edible I thought he had only immortalized in his imagist masterpiece of 1934, “This Is Just to Say”:

I have eaten
the plums
that were in
the icebox

and which
you were probably
saving
for breakfast

Forgive me
they were delicious
so sweet
and so cold

Some still debate whether the “plum poem” is really nothing more than a glorified post-it note left on a refrigerator, but I’ve always thought  “Just to Say” captures more mystery in its mere 28 words than many full-length novels. With striking simplicity, it almost implores us to create our own backstory for the circumstances behind what appears an otherwise uncomplicated communication, all the while poetically brilliant in its alliteration and sensual (“so sweet”…”so cold”) use of description.

The peripatetic plums of Williams’ imagination appear again in the stark and haunting “To a Poor Old Woman”:

And from the lovely “Asphodel, That Greeny Flower,” with its triadic line breaks (W.H. Auden once called it “one of the most beautiful love poems in the language”) comes another, albeit brief, appearance:

There the pink mallow grows
and in their season
strawberries

and there, later,
we went to gather
the wild plum.

I don’t know if it all quite qualifies as a significant motif, but those plums sure were responsible for some magnificent poetry…

Another month, another Top 10 list, this time the 10 Greatest Poets in history, as compiled by Dean Rader, a poet, professor, and cultural critic who writes for the San Francisco Chronicle. The idea was spurred by the “10 Greatest Composers” project at the New York Times from a few weeks ago.

What catches my attention is the relative lack of discomfort at the absence of T.S. Eliot by readers and commentarists alike. I guess I live in a parallel universe, as Eliot and poetry are disengageable in my mind (with many lines ready at a moment’s notice). It’s a valid list nevertheless, though Rader probably expected some controversy with Pablo Neruda at the top. Not here. The Captain’s Verses and Twenty Love Poems and a Song of Despair are both requisite and exquisite.

Following Rader’s American-centric direction, I may have added the pediatrician-poet William Carlos Williams to accompany another compatriot who also had a second life, insurance executive Wallace Stevens, as well as a couple of other favorites, Sylvia Plath and Robert Lowell. (Rounding out the list are Li Po, or Li Bai, or Li Bo — choose the name, same poet — and one who followed, 13th-Century Persian, Rumi, described as [currently] the “most popular poet in America.”) The final lineup:

And just because, I’ll end with Williams’ 28-word imagist jewel, “This is Just to Say”:

I have eaten
the plums
that were in
the icebox

and which
you were probably
saving
for breakfast

Forgive me
they were delicious
so sweet
and so cold

Follow M u s i n g s on WordPress.com