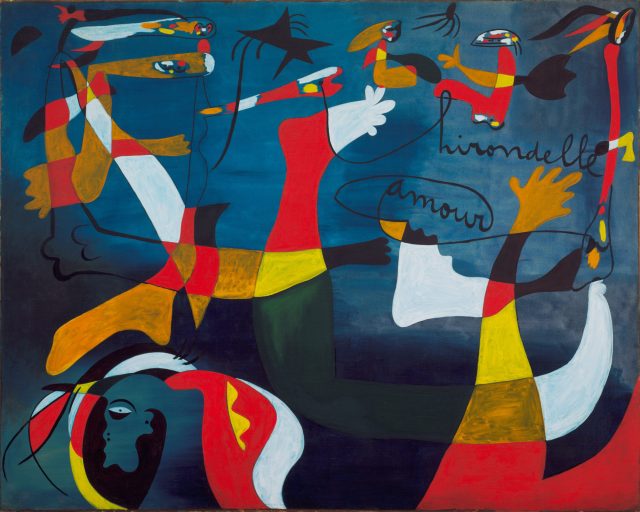 From the exhibit Joan Miró: Birth of the World, on view at New York’s Museum of Modern Art through June 15, the painting Hirondelle Amour (1933) features all the hallmarks of the master Surrealist, and is a boisterous blend of color and abstraction. (Also fascinating is how the work manages to evoke that of his contemporary and colleague Pablo Picasso, whom Miró often clashed with.) “For me, a painting must give off sparks,” Miró once said. “It must dazzle like the beauty of a woman or a poem.” Or, one may add, a symphony.

Along the highways and byways of rural America, some fortunate drivers are encountering eye-catching billboards (one is shown above) designed with the midterm elections in mind and sure to provoke thoughtful reflection. Described as possibly the country’s most ambitious public-art project, they form part of the “50 State Initiative,” a crowdfunded project sponsored by the New York-based For Freedoms organization, and are intended to encourage “civic participation,” according to For Freedom’s co-founder Eric Gottesman.

“It’s not just voting, it’s about using our voices to speak up about the things we feel strongly about,” Gottesman recently told The Guardian newspaper, which reports that more than 200 institutions and 400 artists will be hosting, talks, projects, and exhibits related to political art in partnership with For Freedoms. The more than 50 billboards created for the endeavor (whose locations include Washington, D.C. and Puerto Rico) will remain up through the month of November.

Says Gottesman: “Often the response to the billboards is a question: ‘What does this mean?’” We say: ‘What do you think it means? We don’t know, help us figure out what this means together.’”

And, of course, being a part of the conversation is one of the essential foundations of a shared democracy. (So VOTE!)

Looming large in the neighborhood of Milan’s Largo la Foppa, in the Italian city’s Corso Garibaldi district, is a massive likeness of legendary performance artist Marina Abramovic, whose 2010 project The Artist is Present is the inspiration for one of several Gucci-sponsored “ArtWalls” that currently appear in cities around the globe, promoting an upcoming exhibit curated by the artist Maurizio Cattelan. The reimagined Artist is Present exhibition was conceived as a means of “highlighting the practice of appropriation in the many forms it takes in contemporary culture.” Featuring site-specific and existing artworks from more than 30 Chinese and foreign artists including Damon Zucconi, Christopher Williams, Ma Jun, Aleksandra Mir, and Sayre Gomez, the event is scheduled to run from October through December at the Yuz Museum in Shanghai.

Don’t be fooled by the luscious appearance of these mouth-watering ice cream cones…alas, they’re not quite ready to be consumed. Born of the imagination of artist Jourdan Joly, they are actually plastic sculptures, originally cast in urethane in silicon molds. Joly, who began his ice-cream creations in 2012, says, “I like the slight surreal aspect to it – it always makes people wonder how it was done. For me as an artist this feels like success.” Designated in 1984, July is National Ice Cream Month, with the 15th set aside as the confection’s special day. As good a reason as any to (over) indulge — in the real thing, of course. 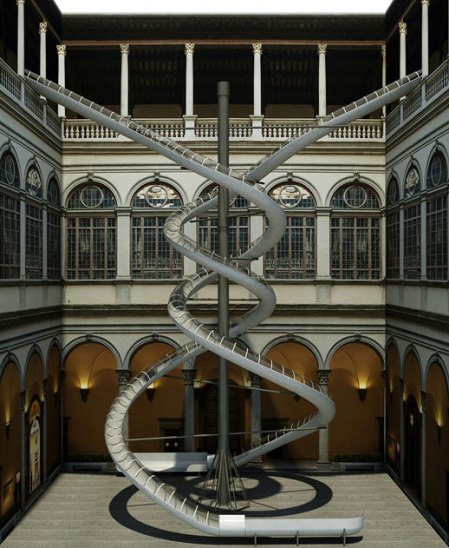 Art meets science in a most intriguing fashion this summer, as a Renaissance palace doubles as a science lab in the Italian city synonymous with magnificent art.

“The Florence Experiment,” an interactive installation at the famous Palazzo Strozzi, was conceived by German artist Carsten Höller and plant biologist Stefano Mancuso as a way to analyze the impact of human emotions on plants — in this case, wisterias. Participants are invited to slide down the two stories from terrace to courtyard with a plant sample strapped to their chests; as they travel down the spiral slides that span 30 meters, their real-time reactions — fear, elation, etc. — are recorded for “live analysis” by on-site scientists immediately thereafter, in order to determine the effect of those emotions on the growth trajectory of the plant. 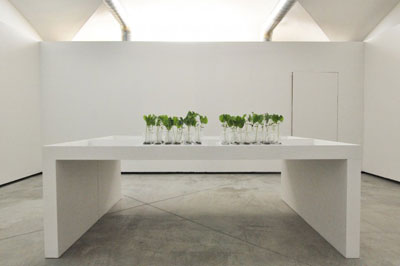 It all has to with things like “volatile molecules” and “photosynthetic parameters” and for the biologist Mancuso, further evidence in his quest to prove that plants harbor intelligence. Adventurous visitors to Florence this season will play a part in advancing that knowledge.

The Florence Experiment is at the Palazzo Strozzi through August 26.

Street art takes on a poignant significance in the war-ravaged neighborhoods of Syria, by way of Australian artist Luke Cornish, whose spirited stencil depictions provide children with a creative refuge from the horrors of a conflict that seems to have no end in sight.  Cornish, who first visited the country in 2016, immediately saw an opportunity to use art as a means for kids to escape, however briefly, from the harsh day-to-day of a region mired in violence.

“I went to a primary school and did some stencil demonstrations,” Cornish told Australia’s The Age. “I then went to another place and we gave them some spray paint to paint on the walls. They had so much fun. I’ve been using art as a tool for them to open up and escape some of the trauma.”

Cornish has since formed the not-for-profit ‘For Syria’s Children’ (FSC), a fundraising endeavor that hopes to provide financial help to Syrian youth impacted by the country’s civil war. At the end of the day, the artist says, “These kids I have been working with…they don’t question if you’re Christian or Muslim.”

Follow M u s i n g s on WordPress.com